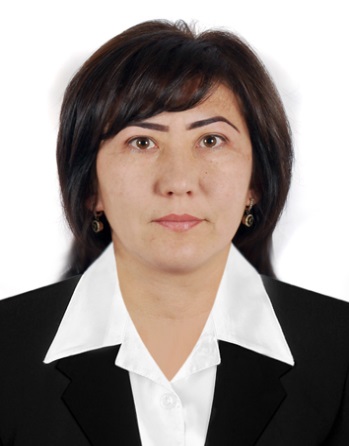 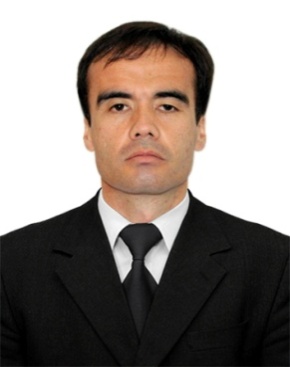 Alexander Vasilievich Saveliev was born in 1898 in Saratov Province of Russia. He graduated from the medical faculty of Saratov State University in 1925 and worked as a trainee in the torinolaryngological clinic of this faculty and in 1930 he came to Samarkand. Saveljev was the head of the department in 1933-1950 and at the same time in 1935-1939 he was the chief doctor of the polyclinic. He had been a professor-advisor at the evacuation hospital in Samarkand in 1941-1944, and during 1941-1942 he had been a head of Samarkand city public health department. In 1943-1945 he worked as a dean of the Medical Faculty of SamMI. A.V. Savelyev was awarded honorary title "Honored Scientist of Uzbekistan". In 1950 he was appointed the rector of Kursk Medical Institute and head of ENT-diseases Department.

From 1932 to 1948, the department was headed by S.K. Chengeri. Stanislav Chengeri was born in 1898. In 1925 he graduated from the medical faculty of the University of Saratov. Having moved to Samarkand, he worked in a clinic as otolaryngologist and deputy chief physician for medical work. С. Chengeri defended his thesis in 1944 and in 1945 he was awarded the title of associate professor. In his later years he worked as an assistant professor at the department of otorhinolaryngology of the SammaI. He was awarded the honorary title "Honoured Physician of Uzbekistan".

Veniamin Andrejevich Gorchakov was born in 1918 in today's Volgograd region of Russia. In 1940, after graduating from Voronezh Medical Institute, he was called up for military service. During the Second World War, he took part in battles as a military doctor, was besieged and took part in the partisan movement. After the war, he continued his military service and worked as a military doctor in hospitals. From 1951 till 1959, V.A. Gorchakov worked as an assistant at the department of otorhinolaryngology of Medical Institute of Turkmenistan, from 1959 till 1970 he worked as a senior research fellow at Kiev Research Institute of Otolaryngology. In 1969, he defended his doctoral thesis and received the title of professor in 1970. Prof. V.A. Gorchakov was elected to be the Head of the Department of Otorhinolaryngology of SamMI in 1970 and was the Head of the department till 1981. From 1981 to 1987 he was a professor at the same department. 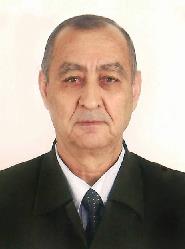 Tahsin Khamidovich Nasreddinov was born in 1944 in Kattakurgan district of Samarkand region. In 1966 he graduated from the Medical Faculty of Samara State Medical University. From 1968 to 1971 he studied at the Central Institute of Postgraduate Medical Education in Moscow at the ENT - Diseases Department, defended his dissertation. From 1972 to 1978, T.H. Nasreddinov worked as an assistant on the department of otorhinolaryngology of SamMI. From 1978 to 1980, he studied for a doctoral degree. From 1981 to 1983, he worked as a pro-rector for academic work in SamMI. Akram Ibrahimovich Muminov was born in 1937 in Samarkand. He graduated from the Medical Faculty of Tashkent State Medical Institute in 1961. From 1961 to 1965 he worked in the clinic of ENT diseases and simultaneously as an assistant to the dean of the Faculty. Then he moved to TashMI, where he defended his doctoral and candidate theses. He worked as associate professor, head of ENT-diseases chair of Tashkent Medical Institute, where he received the title of professor. A.I.Muminov was simultaneously dean of the medical faculty, and then vice-rector on educational work. Prof. Muminov was one of the founders of the Bukhara Medical Institute in 1991 and the first rector of the institute in 1991-1995. In 1995 he moved to Samarkand, where he worked as a rector of the SamMI and simultaneously served as the head of the chair of otorhinolaryngology from 1995 to 2000. Professor A.I.Muminov was awarded the honourable title "Honoured Worker of Science of Uzbekistan".

In 2001 U.L. Lutfullaev was selected as the head of the chair. Umrillo Lutfullaevich Lutfullaev was born in 1943 in Urgut, Samarkand region. He graduated from the Medical Faculty of SamMI in 1967. He began his career at Urgut Central Hospital. After mastering his ENT specialty he organized and headed an ENT department at the district hospital. Together with his practical work he worked as a researcher. In 1978 he defended his thesis at the Specialized Scientific Council of the Central Institute for Advanced Training of Physicians in Moscow on "Condition of upper airways, olfactory and vestibular analyzers and prevention of their violations in tobacco farmers". U.L. Lutfullaev worked as a chief doctor at Urgut Central Hospital and continued his research work. In 1988 - defended his doctoral thesis on the topic "Vascular organs of ENT organs of lungs (Clinic, Diagnostics, Treatment)" at Kolomiychenko Scientific Research Institute of Ear, Throat and Nose in Kiev. 1989- 2013 г. He worked as Head of the Department of Otorhinolaryngology at the Faculty of Advanced Medical Education of SamMI. Currently, he is a professor at the department. THE SPIRITUAL AND EDUCATIONAL ACTIVITIES OF THE DEPARTMENT

Students and future specialists have their leisure time also in the cultural-educational activity. One of the main activities of the department is the formation of high moral values, fostering interest in professional activities, the need for a healthy lifestyle, involving students in cultural events of the University. For realization of these tasks in the department to the groups the supervisor among experienced teachers is assigned. Under the guidance of supervisors, the students actively participate in public events, organize cultural leisure and visit historical monuments and landmarks of Samarkand, theatres and museums. Much attention is paid to physical education and sports. Graduate students and clinical residents attend sports sections in tennis, chess, football, basketball, volleyball, national wrestling, oriental martial arts, track and field, which function on the basis of the sports complex of the Institute. They take an active part in regional and republican sports competitions.

According to a wisdom of the East, "It is impossible to separate education from upbringing and vice versa". More than 200 specialists graduate from the faculty every year.

Spiritual-educational work is conducted on the basis of the approved plan, according to which various events dedicated to historical dates, national holidays, sports competitions, etc. are held. Various meetings are held jointly with internal affairs bodies, law enforcement agencies, spirituality centres and other partner organisations.

Each supervisor has a work plan, based on which he or she carries out various activities with the supervisory group. There are also albums and CDs on which the activities are recorded. Every Thursday, the class begins with an information session.

The main aim of the department's activity is to improve by health care specialists their professional knowledge, practical skills and abilities, as well as to prepare them for new job functions.

The objectives of the department are:

- Meeting the needs of health workers in obtaining new knowledge about the achievements of domestic and foreign medical science and technology, foreign best practices and scientific organization of work;

- Implementation of advanced training and retraining of medical workers in accordance with the educational programs approved by the Ministry of Health in the prescribed manner, using in the educational process achievements of modern medical science and high medical technology;

The Department of Otorhinolaryngology at the Faculty of Postgraduate Education trains otorhinolaryngologists and doctors of other specialties from the following regions of Uzbekistan: Samarkand, Jizzakh, Kashkadarya, Surkhandarya, Navoi, Bukhara and Khorezm. 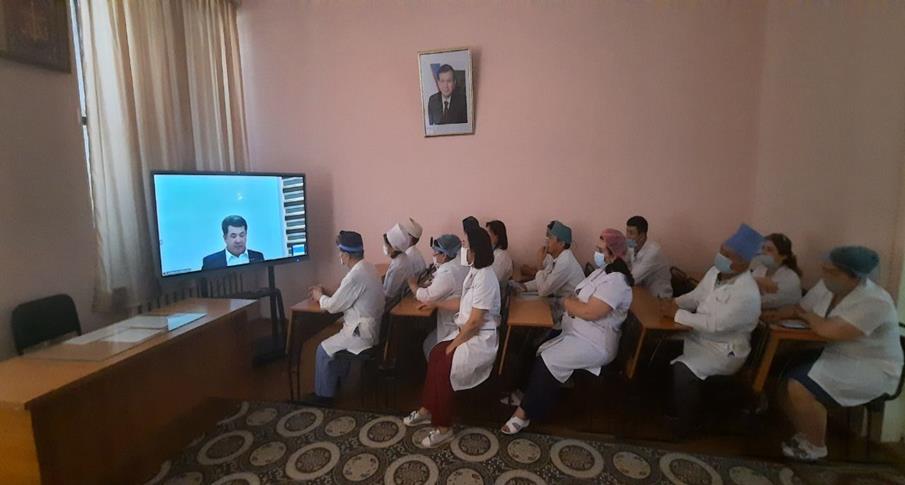 Cadets at an online conference

Training and methodological work at the department is organised in accordance with the educational normative-legal documents of the Republic of Uzbekistan.

Training is conducted according to the following approved documents for each course:

The following professional development programmes have been prepared and approved by the staff of the department:

1. "Modern methods of diagnostics and treatment of ENT organs" 144 credits

3. "Methods of Diagnostics and Treatment of Respiratory Pathology in Polyclinic and Outpatient Settings" 72 credits

The qualification upgrading courses for physicians are carried out on these thematic areas.

The following technical tools are available during the course such as a telemedia system, videos on the topic, presentations, multimedia programmes, lectures and practical exercises. 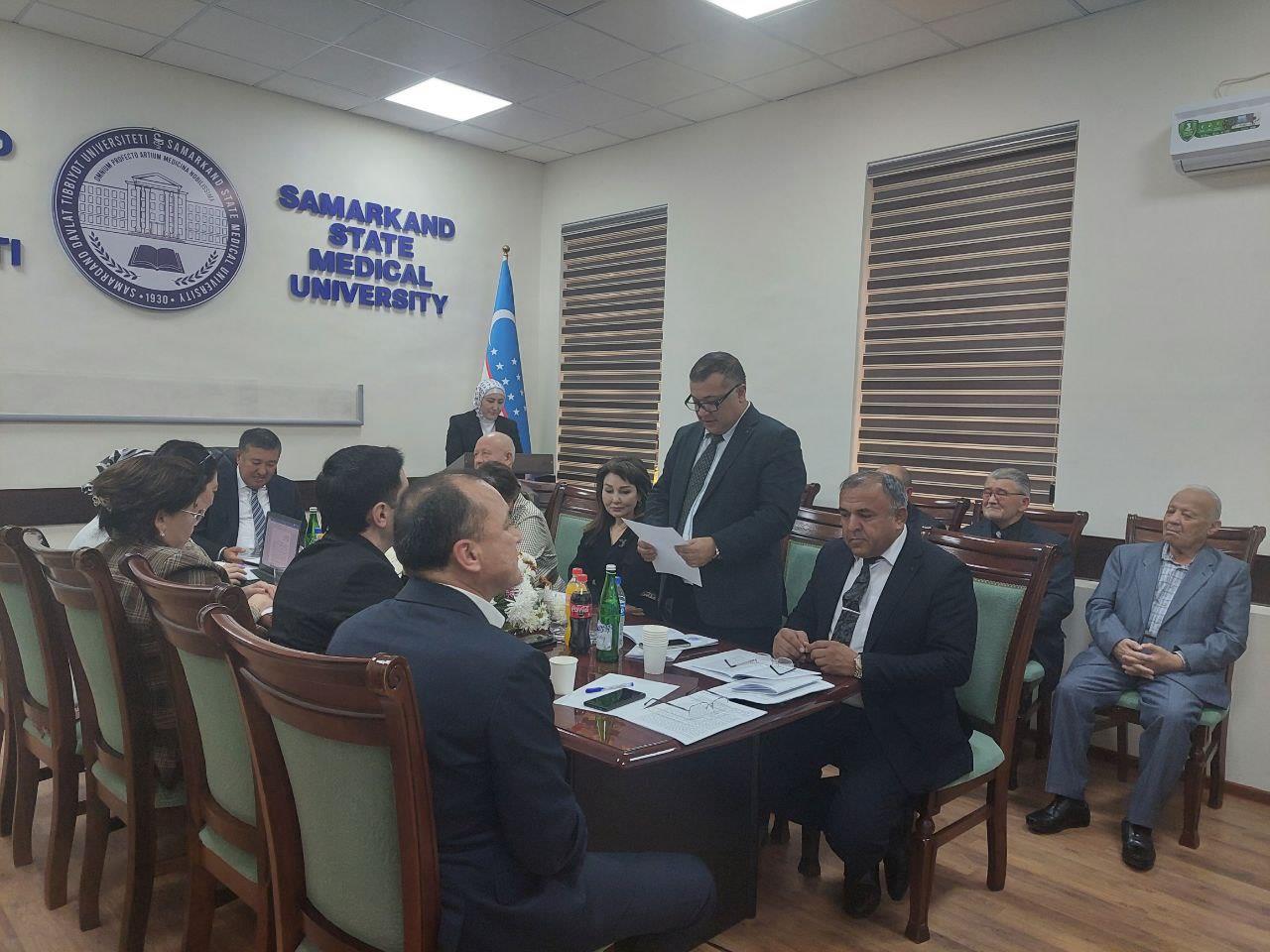 
Currently, there is ongoing active scientific research at the department: U.S. Nematov, M.A. Bekmurodov and D.S. Fayzullaev are finishing their dissertations for the PhD degree.

The scientific directions of the department:

The scientific work of the department's staff was carried out in close relationship with the training of scientific-pedagogical personnel and the requirements of practical health care, and is currently aimed at solving problems identified in the state program of science and technology development.

Samarkand State Medical University is rapidly developing relations with more than 60 State and international organizations, foreign universities and research centres, and those involved in international cooperation in education and science on the basis of the principle of equality. Cooperative dialogues have been established with universities in Europe, Asia, North America and CIS based on joint programs and educational mobility.

Every year the number of highly qualified specialists, professors, students and researchers from abroad who visit SamSMU in order to establish cooperative dialogues, study, improve qualifications and participate in scientific conferences increases.

SamSMU is ready to establish contacts with educational and scientific centres, universities and public organisations all over the world and the doors of the Institute are open to all applicants, students, researchers and teachers from abroad.

Geography of cooperation: the Department has links and cooperative dialogues with more than 10 higher education institutions and research centres near and far abroad: