Department of Pediatric Surgery No. 2

The course of children’s surgery attacked to the Chair of Faculty Surgery was founded in 1966 according to the initiative of the honoured scientist of Uzbekistan Republic prof. F.M.Golub and assistant professor M.A.Ahmedov. Department of children’s Surgery with 30 beds was opened in Clinic N1.of SamMI. In 1970 assistant professor M.A.Ahmedov was elected Head of the Chair of Children`s Surgery. From 1995 the Chair is headed by prof. I.A.Ahmedjonov. In 1990 the Chair is transferred on the basis of regional children Multiprophile Hospital where it continues its activity up to now.. Dots as the head of the course. M.A. Akhmedov was elected and appointed assistant to M.G.Asadulin, I.P.Prokhorov and U.U.Umarov was accepted

By 1970, the course was transformed into a Department and the head of the Department became prof. Professor M.A. Akhmedov, Honoured scientist of the Republic of Uzbekistan, honored worker of health of Uzbekistan, honorary member of the Russian Association of pediatric surgeons, author of more than 400 scientific works, including 6 collections of scientific works, 18 training and teaching AIDS, 12 educational-methodological papers, 10 inventions, 14 advanced suggestions 19 journalistic work.

Professor M.A. Akhmedov for 30 years of leadership of the Department through targeted postgraduate and doctoral studies, 10 people have defended their doctoral and 19 PhD theses. Among them, Professor M.A. Akhmedov has defended 6 doctoral and 10 PhD theses under the direct supervision of. Currently, the Department has 3 professors and 4 heads of departments.

Since 1973, the Department has started admission to a clinical residency in the specialty of Pediatric surgery

The Department has a well-established activity of the "student scientific circle". Employees of the Department and students regularly participated in all-Union scientific conferences and received 4 gold, 4 silver, 4 bronze and diplomas of I-II-III degrees, certificates of honor.

Professor M.A. Akhmedov gained authority among the staff of the Department, students and employees of the Institute and management for his achievements in organizing the Department, drafting and implementing educational programs adapted to pediatric surgery, forming a creative teaching team and fostering a warm atmosphere in the team, as well as for his services in embodying Eastern traditions. 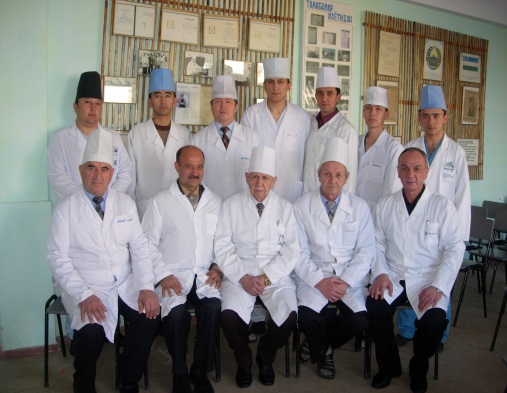 The Department cooperates fruitfully with medical universities in Moscow, St. Petersburg, Donetsk, Almaty, Tashkent, and Andijan. Since the creation of the Department, 12 people have defended their doctoral and 26 PhD theses. Of these, 10 PhD and 4 doctoral theses were defended through targeted doctoral and post-graduate studies.

Department of Pediatric Surgery No. 2